A quote which I’m very keen on and that I like to use in this kind of situations states something like this: “You’ll have to put a lot of effort during your climb, but remember that once you’ll get to the top, the view is wonderful”. On my way to Santiago I thought of it several times, almost in a natural way, but the first one seemed like a paradox, since it was a very peculiar situation. It was because of the fact that while I was whispering that sentence to myself, I wasn’t standing on the top of a mountain: I was at the bottom.

Molinaseca. This is the name of a nice town in Castilla, crossed by Rìo Meruelo, and situated at the bottom of Monte de las Dos Hermanas and Monte de Cabezo. Fifth stop of our route; my personal hell, death and rebirth of my pilgrimage.

That day we were departing from Rabanal del Camino, heading to El Acebo, around 20 kilometres, a simple and kinda relaxed walk in the morning. We were following Alessandro’s advice, who was an old hand pilgrim who suggested us not to go beyond, in order to avoid walking down a slope for eight kilometres risking to hurt ourselves and consequently not managing to go on the next day. After what seemed to us to be nothing more than a stroll, once we arrived at destination, we dedicated ourselves to lunch and public relations, and we started to look for a place to sleep. Apart from the fact that we decided to completely exchange our intentions for a brief and transitory feeling of relaxation and an impetus of moral and physical positivity. So we decided to add 8 kilometres more to our walk, that shouldn’t have been more than 2 hours. Practically, a whole afternoon under the schorching sun in an improvized climbing, on a slippery slope along the slant of a mountain, that was full of sharp rocks. When we were told about that eight kilometres slope we were actually a little bit concerned. But that day, filled with our enthusiasm and a terrific strength (that, retrospectively estimating, was a little bit extra), we went on walking after lunch, and, with our bellies full of jamon serrano and tortillas, we left. Us four and a new friend, a quiet and gentle german girl that we met the day before at the albergue, that joined us during that stop. For the first two kilometres we were singing, laughing and joking, a lot, and maybe we also mocked who dissuaded us from taking that road, on the same day and at that particular hour, considering us inexperienced and weak.

Then the rocks, the roots, the tracks under the sun, the lack of places to cling to while walking down, arrived; an empty water bottle; knees hurt, since they were constantly bent in order to brake on the slope, and to bounce in order to feel a little less weight on our back. Slope, comment, flat. Slope, swearings, flat. Slope… then tears arrived and the flat zones disappeared. No one among us was speaking anymore, our sight downwards to our aching feet; or instead to the inclines of the mountain, looking for a village, a sign of life and victory. I found myself looking at the sky, thinking that I needed help and that I didn’t know if I would ever arrive to Molinaseca. Needless to say, we noticed our mistake almost immediately, even by seeing that there was no one around, since everybody stopped before: so, by the time, we were completely alone, surrounded by brushwood and nothing but mountains. It’s really hard to try and describe with words the despair that we felt in that moment, the mistrust and the will to sit down and give up. Instead, when we were dragging our feet on soil and dust, heavily breathing, and drying our soaking wet foreheads, finally, like a gas station on the motorway, there was a sign, and the word Molinaseca. I seriously doubt that that board had ever saw nor someone so happy to meet him, or had ever received so much affection and hugs “during his life”.

Speaking of Molinaseca, its winding path, the -conciously- wrong choice, its beauty, the physical pain and the mental exhaustion will always be stuck in my mind. But, more than this, the hug and the joyful crying of five knackered girls, but still sure about the fact that “once you get to the top -or bottom- of a mountain, the view is wonderful”. And it really is. 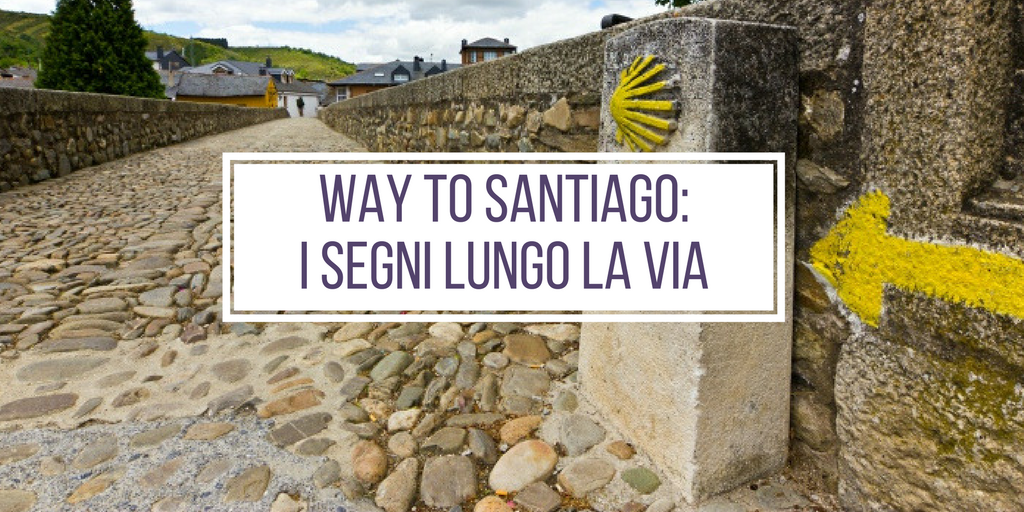 Way to Santiago #2: Signs along the way